There is no doubt that they are larger of all known hornet species around world as name indicates originated from Asia.

So no offence to call them “The Mighty Giant Hornet” 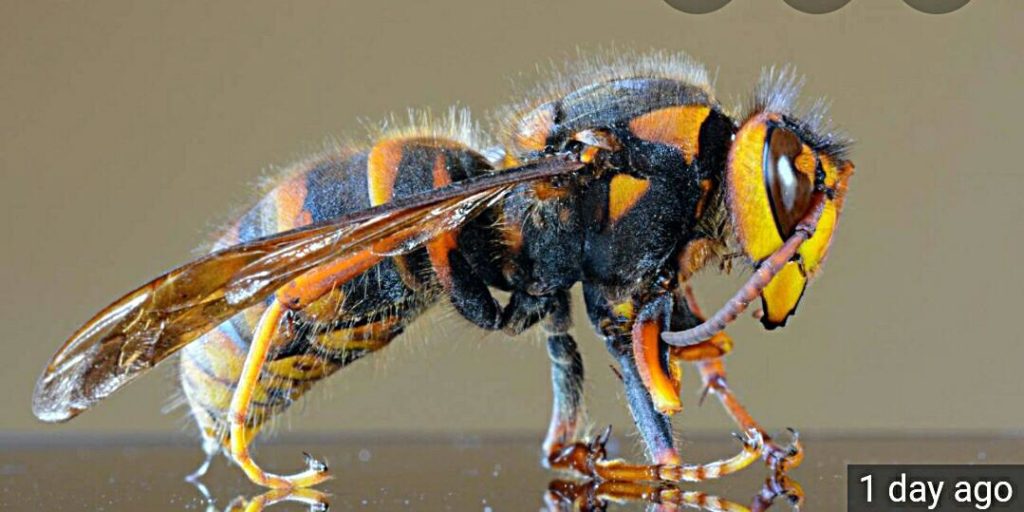 A queen’s body length can exceed 5 cm, with a wingspan that can exceed 7.6 cm with a unique characteristic orange head and black-banded orange body.

Fact with Fact is that…

Like any other social wasp, they will defend their nest and aggressive if the colony is disrupted then, they won’t see who was in or out in plan. Moreover, they are multiple stingers and to humans these multiple stings can cause fatalities.

To mention here is that they are not predators of human but to honeybees. They are also voracious predators capable of massacring entire honey bee hives in a matter of hours— decapitating thousands of the hive’s adult bees and absconding with the helpless larvae to feed the hornets’ own brood.

Globally, from these hornets 60 to 80 people die from allergic reactions to honey bee stings in the U.S. only about 40 people die per year, in Asia, mostly in Japan, from reactions to the giant hornet sting.

Like other creatures honey bees know their natural enemy and have a plot to defend him-they wait for a hornet to enter their nest, then mob it by surrounding it completely with their bodies.

Each honeybee vibrates its wings, and the combined warming of honey bee bodies raises the temperature in the center of the cluster to 122 degrees F (50 degrees C), killing the hornet. Carbon dioxide levels in the nest also increase during this process, which contributes to the hornet’s death.

Comprehensively, It would be great to compile that they are stingers and predators of honeybee hives by nature that nobody can alter. So it is better to call a professional if you have witnessed any hornet around your hive rather of putting your own science and got defeated by hornets at the end and being claimed of a murder!

Being the sub-tropical part of the world, Pakistan encounters many pests of public health importance and due to lack... read more

School of IPM @ UPM is one and only institute of its own kind established in 2018 to offer... read more

Treating the Mighty Termites in Pakistan

Termites outweigh the total human mass on planet Earth! Yes you heard it. Reason being that almost every young... read more

Get an advance hand on these invaders Fall is the transition of summer into winter season; evident of leave color... read more

Get Rid of Mosquitoes & Flies by Growing Plants!

House flies and mosquitoes are recognized as carriers of easily communicable diseases. They collect different pathogens on their legs... read more

House flies and mosquitoes are recognized as carriers of easily communicable diseases. They collect different pathogens on their legs... read more

Cockroaches: Cockroaches can be a carrier of 6 parasitic worms and 33 types of bacteria, and also trigger asthma attacks. Cockroaches... read more

Termite Control in Pakistan Destroyers of construction materials such as woods, garments and food items, “Termites” exist on the surface... read more